Babble – Strollerderby: “…Hirsch gives a lot of credit to East Middle School in Sioux City, Iowa, where the documentary was shot: “It took a lot of courage for them to allow us to make this film. It was very brave. Most schools wouldn’t have done it. This is a district, a superintendent wanting to be better. Even Alex’s own parents were unaware that he was being bullied like this. They knew only that “something” was wrong: their son was not the same child he had been. He was unhappy and withdrawn. “If you have ever searched for an answer to a problem and were unable to find it, and felt completely defeated … only to find that the answer was the worst answer in the world — that’s how we felt,” explains Jackie Libby, Alex’s mom. But though Alex is now at a different school and has many friends, she insists he hasn’t changed. What she sees is who he used to be. “It is incredible,” she says. “My family and I discussed it: there is no greater gift than getting your child back. The Longs don’t get that option, so we want to pay it forward. We want this for more families.” Hirsch describes Alex as a “joy to watch,” and Alex himself now offers advice to kids experiencing the same struggles he did. “Tell someone about it,” he says. “Being alone makes you feel worse. Speak up. If you see it happening to someone else, tell a friend…” – Danielle Smith (READ MORE)

The Daily Beast: “…Hirsch said he would love for children and teens to understand the power they have to stop bullying the next time they see or hear it happening. There are so many ways for kids to be change-makers, he said. Some kids have the comfort level to stop bullying directly, while others have different strategies that include sending a note or finding the victim later and saying, “Come sit with me,” or “Let’s talk to someone together.” His final advice: simply be creative with ways to become an upstander…” – Emily Anne Rigal (READ MORE)

National Post: “…Hirsch, 39, says the censors wanted him to clean up the language, but, he says, “Unfortunately, bullying is about language. It’s about how people are insulted. It’s about what’s said. And to clean all that up, our movie would look like the poster, which is PG-approved, which has words like ‘loser’ and ‘dork.’ That’s not how kids are bullied. They’re bullied with profanity. There’s not a student in Canada or anywhere else that doesn’t hear these words a thousand times a day.” Coincidentally, Bully comes out at the same time as the PG-rated film, The Hunger Games, set in a dystopian future when teenagers kill one another. “The release of Hunger Games in the same breath as Bully has really helped people to realize the hypocrisy of the MPAA,” Hirsch says. The real shocks in Bully, though, come in its depiction of bullying itself, especially in the case of Alex. The filmmakers were embedded in classrooms, in school halls and on the buses, capturing endless scenes of abuse on their small, unobtrusive camera. The boldness of the bullies is a surprise, especially in the presence of adults. Hirsch says he was transparent with school officials, faculty and students about what he was doing, but he quickly started to “blend in with the walls…” – Jay Stone (READ MORE) 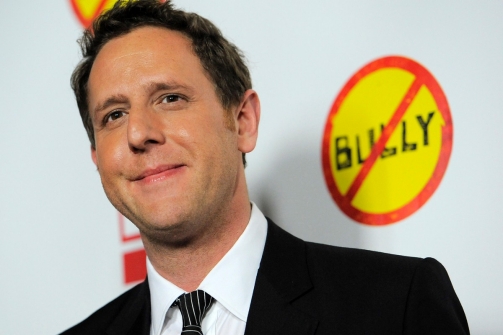 Lee Hirsch (born 1972) is a documentary filmmaker. Hirsch is a graduate of The Putney School in Vermont, and a graduate of Hampshire College, in Amherst, Massachusetts. He wrote and directed the documentary Amandla!: A Revolution in Four-Part Harmony…His film Bully premiered at the 2011 Tribeca Film Festival. Bully follows several families from across ethnic, cultural and geographic boundaries as they grapple with the tragedy their family has faced as a result of bullying. Several of the families profiled in the film had lost a child because he or she became fed up with the mostly mental and sometimes physical abuse they experienced on a daily, even hourly basis at school, on the school bus, and in their communities. – Wikipedia (READ MORE)

Pink News: “…When I read about suicides and gay teenagers it’s so tragic. I don’t think teenagers realise that it actually does get better. The minute you’re done with high school your life gets better. If I’m the go-to for new gays, and if I can be someone that gay teenagers can look at as someone who’s happy and who has made a good life for himself, then that’s great. I had people like that for me when I was growing up, and it was very important. The Scissor Sisters front man added: My advice would be to just stick to who you are. There are sacrifices you have to make, there are crosses that you have to bear. You’re always going to be portrayed in a certain way, you’re always going to be pigeon-holed. That’s the price that you’re going to pay. But it’s a price that’s worth it. It’s a responsibility. So that would be my advice – remain exactly who you are…” (READ MORE)

Pink Paper: “…When asked about life as an openly gay celebrity figure, Jake speaks out: “If you’re going to be a closet-case then just lie and say you’re straight. It bugs me when they say “why are you asking me if I’m gay? It doesn’t matter.” Well it matters a lot to the fifteen year-old at home who’s going through it. It’s a highly offensive statement and it makes me angry. On being labelled as just a gay band, he continues: “We’re still thought of as a gay group a little, but we hope we’re growing out of it. After living in New York where being gay was fine, the idea of going back into the closet to sell records was wrong. It wasn’t an option for us. I don’t know if that gay band label will ever go away, but that’s okay because at least we’re thought of as something.” ..” – Stu Hurford (READ MORE)

Examiner: “…Shears is poignant in his video admitting to the difficulties and hardships he experienced coming out. I was harassed, I was followed, I was threatened,” Shears says in his video. “Kids wanted to kill me. I couldn’t go from class to class without being accosted. Kids would throw desks and chairs at me in class. I thought about killing myself a few times during this period in my life and I’m so glad that I didn’t because I’m living the dreams now that I created when I was fifteen. It’s such a rewarding life that I’ve gotten to lead. If I’m the go-to for new gays, and if I can be someone that gay teenagers can look at as someone who’s happy and who has made a good life for himself, then that’s great. My advice would be to just stick to who you are. There are sacrifices you have to make, there are crosses that you have to bear. You’re always going to be portrayed in a certain way, you’re always going to be pigeonholed. That’s the price that you’re going to pay. But it’s a price that’s worth it. Remain exactly who you are…” – Robyn Chelsea-Seifert (READ MORE)

Jake Shears (born Jason F. Sellards, October 3, 1978, Mesa, Arizona is the lead male vocalist for the American music group Scissor Sisters…Shears is known for provocative dancing, flamboyant outfits, and near-nudity. (During his early years while he was struggling to make it in New York, he would often earn extra money as a Go-go dancer and male erotic dancer at gay-oriented strip clubs.[7]) His musical influences include ABBA, Blondie, David Bowie, Duran Duran, Roxy Music, The New York Dolls, Queen, Cyndi Lauper, Madonna, Paul McCartney, Pet Shop Boys, The Beatles, and Dolly Parton. .[8] The Scissor Sisters video for Filthy/Gorgeous was directed by John Cameron Mitchell after Shears met him at a gathering of the Radical Faeries… – Wikipedia (READ MORE)